Taking a wider view: The challenges and opportunities of intercultural education

The need for children and adolescents to constructively and successfully negotiate a society shaped by cultural diversity means that intercultural education in day-to-day schooling is more important than ever. But how do school children acquire the ability to recognise and appreciate cultural differences and similarities?
AUTHOR: ANTONIA SEIFERT | COLLAGES: MARTIN O'NEILL | 2017/1 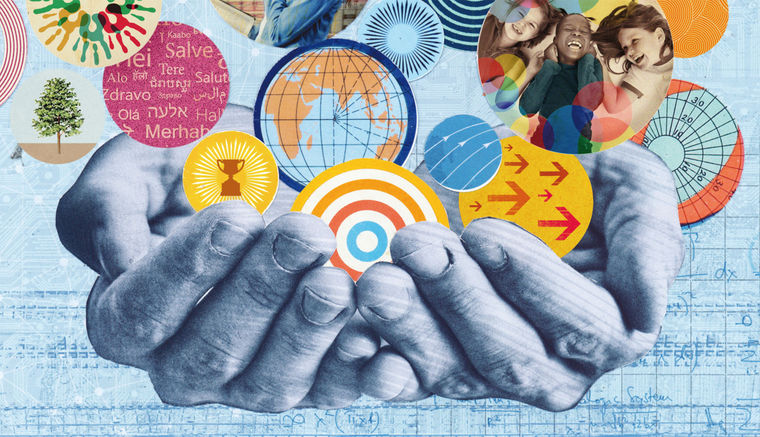 Tuesday, 12:35 pm. In year 7b of Phorms secondary school Berlin Süd, the fifth period is beginning: History with Mr Diettrich. The young teacher offers a friendly welcome before getting the 14 girls and boys to recapitulate the consequences of the Thirty Years’ War. Later in the lesson, the class discusses Louis XIV and Versailles. Controversial opinions on the king’s appearance aside, the students listen attentively, let others speak and support each other’s statements. One of them is Matthias Llerena Rosen. Matthias has been at the secondary school in Zehlendorf for about a year. He and his brother, Sebastian, first went to school in Quito, Ecuador, where they were both born. Later they attended schools in Panama City, São Paulo and Schleswig-Holstein. When Matthias came to his present class, he was warmly welcomed from the start. ‘I really liked it here from the very first day. Everyone was very nice and I felt like a part of the group right away,’ says the 13-year-old, with a typical Spanish rolled ‘r’.

His brother, Sebastian, is in year 9 at the same school. Sixth period is now under way, and Sebastian has Science with Mr Earley. Another young teacher, Mr Earley comes from England and teaches solely in English, which is also the language the students use among themselves in class – all as part of the foreign language acquisition programme at Phorms. In this class, too, everyone is interested in their classmates and there’s a sense of friendly cooperation between students and teacher. No one seems to be an outsider here. Valérie Hardt, Head of Secondary School at the Phorms Campus Berlin Süd, attributes this atmosphere to the philosophy of the school. ‘We have an open culture of welcome here. Diversity is a given, and one we see as a resource rather than a threat. It doesn't matter where you come from. The experience of diversity is part of our model.’

When it comes to the content of intercultural education, state governments and schools are in agreement: the key pillars in the curriculum framework and school programmes are awareness of the cultural conditioning behind one’s own patterns of behaviour and those of others, appreciation for cultural diversity and a capacity for discourse driven by language skills. It sounds logical in theory, but putting it into practice is a major challenge. This is something that Regina Bendix, professor at the Institute for Cultural Anthropology at Georg-August-Universität in Göttingen, knows all too well. ‘It starts with what we understand by the term “culture” itself, and the danger of using the term too comprehensively. Without nuanced awareness and usage, it can quickly become a form of stereotyping that no longer corresponds with actual cultural diversity.’

Teachers are not just required to pass on knowledge. They should model behaviour through their skills in interdisciplinary issues such as intercultural education and consider the individual needs of students. The impact of stereotyping can be seen in the case of Matthias and Sebastian. Their father is Peruvian, their mother half Swedish and half German. They grew up in Latin America. They first encountered German schooling when they moved to Schleswig-Holstein. Matthias, with his German name and German language skills, was considered a student  just like any other. ‘But they didn't acknowledge the fact that he did not have the vocabulary of a secondary school student nor any experience of text-based exercises in German,’ recalls Petra Rosen. ‘Despite my attempts to talk to the teachers and explain our background, I didn't feel they had a nuanced awareness or understanding of my children.’ Matthias and Sebastian both became unmotivated and for the first time their parents worried whether they would receive their leaving certificates at all. When it came to choosing a new school, this time in Berlin, Petra Rosen and Gonzalo Llerena knew that they needed a restart, with more sensitivity from the school side. Now their sons have rediscovered the joy of learning, and their bilingual lessons tap into their existing language skills. 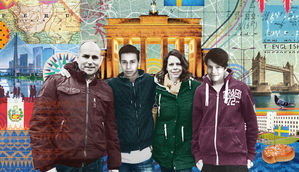 Matthias and Sebastian are currently visiting the Secondary School at the Phorms Campus Berlin Süd.

Each day they experience cultural diversity at school and home.

‘In terms of cultural diversity, schools have to recognise differences in individual socialisation, to clarify it and, if necessary, compensate for it,’ says Nina Kolleck, professor of education research at Freie Universität Berlin. An important first step is taken when teachers are aware of the various patterns in a multicultural school community and take them into consideration. However, to communicate the concept of enrichment through other cultures to children and adolescents involves a high degree of cultural sensitivity. This includes, for instance, not using the term ‘culture’ as simply a synonym for migrant heritage or particular religions. ‘Each person has a culture and their own cultural conditioning, which involves a lot more than just background and religion,’ says Regina Bendix. ‘And it is precisely this understanding that intercultural education is meant to provide.’ But that brings us to the next stumbling block. The cultural anthropologist believes that the challenge is not to simply present cultural differences such as typical national dishes or costumes, and thus emphasise difference, but for individuals to compare different cultures and determine where similarities lie. Nina Kolleck holds a similar view. ‘Intercultural education doesn’t mean drawing boundaries between cultures; rather it shows how they influence each other and how they come about. And to make that comprehensible to students, it is important to include everyday elements.’

Schools already offer positive conditions in which to experience cultural diversity. ‘When we look at the school as a res publica in miniature, we see that interculturalism is formed primarily through discourse; that is, through young people talking to each other,’ explains Michael Gehrig, Head of the Phorms Schule Frankfurt, which has students from more than 50 nationalities across two locations. There are opportunities for exchange about culture on both the student and teacher side. Children who have grown up in heterogeneous environments are aware of differences, but they see them as completely normal and do not modify their behaviour – an ideal intercultural attitude.

That includes Tristan von der Hagen in year 6 at Phorms Campus Berlin Mitte. The 11-year-old attended school in Vietnam until almost two years ago. When asked if he can tell that his fellow students or their parents come from another country, he replies: ‘I don’t notice it. I only know when they tell me.’ His class includes children from Germany, Spain, Portugal, Turkey, Canada and Russia. Tristan himself has a Chinese mother and a German father. ‘At this point, teachers can explain which phenomena we naturally assign to our own cultures, but which actually come from other cultures – and how much our own culture blends with others and how it’s often difficult to distinguish between them,’ suggests Nina Kolleck. 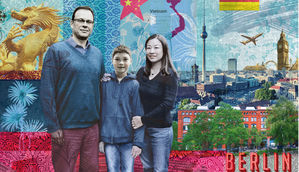 Tristan is in year 6 at the Phorms Campus Berlin Mitte.

The 11-year-old attended school in Vietnam until almost two years ago.

At 15, Sebastian Rosen already has a broad understanding of culture and interculturality. ‘People from different countries and cultures should get on with each other and know that we are all related in some way. And we should all be open-minded with other people, no matter their origin, sex or religion, to learn from them and experience new things,’ he says.

His understanding of interculturalism mirrors the culture of welcome described by Valérie Hardt and was one of the reasons for the choice of school. Tristan’s parents also value the diversity of Phorms. ‘It is good for Tristan to experience interculturalism beyond his own family – who knows where in the world he will live,’ says Wolf von der Hagen.

Teachers themselves also contribute to diversity in schools by building a multicultural teaching faculty, in particular in cities and bilingual schools. In the case of Phorms, half its teaching faculty is foreign, with bilingual lessons given by teachers from English-speaking countries. In addition, the foreign language teachers for Spanish and French are ideally also native speakers – as is the case currently at the Campus Berlin Süd.

The role model function that teachers fill is a decisive influence in intercultural education. They function as an authority and should be aware of this role. Nina Kolleck believes that teachers have to counteract radical tendencies and take into consideration a broad spectrum of socialisation – particularly if the parents’ education has not yet reached this point.

Increasing the capacity for discourse in children and adolescents requires both an understanding of the subject and the language itself. Linguistic education is a key component in the context of intercultural education. The primary objective is to ensure a shared understanding within a multicultural society in miniature – the class community. Michael Gehrig points out that meaningful use of language, and the perception of meaning itself, are just as important as foreign language education. English remains the lingua franca and means students will later be able to communicate in many different parts of the world. Nina Kolleck would like to see foreign language education expanded even further, and thus provide students with access to other cultures.

On Thursdays, Matthias and Sebastian finish their lessons at 3:00 pm. Following lessons, there are daily optional working groups. As well as groups for sports, theatre, choir and maths, a Spanish teacher at the secondary school also leads a culture group. ‘Our Spanish culture group meets once a week with Señora Delgado,’ explains Valérie Hardt. ‘The children engage with Spanish culture in the form of customs, recipes, traditions, politics and music. It culminates in a trip to a Spanish city at the end of the school year.’ Throughout the school year about 20 children learn the theory of Spanish culture, which they can then put into practice. Last year, Sebastian visited Granada with the group. This group at Phorms in Zehlendorf is a prime example of the growing need for intercultural education, which should not only be interdisciplinary, but also ideally take place throughout the school – not just in the classroom. 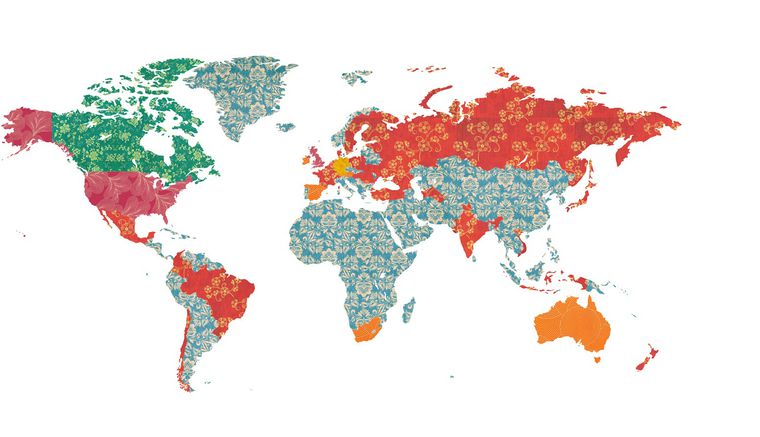 Not only do the students at Phorms come from all different parts of the world, but the teaching staff do as well. Phorms employs 769 members of staff, *who contribute their language, culture, traditions and diverse teaching methods to the schools and early-years groups.
2017/1
AUTHOR: JASMIN WILCZEK | COLLAGE: MARTIN O'NEILL
Tweet
E-Mail
Drucken