Growth Mindset: Failure is the most essential step to success

Some people give up immediately when things get tough, while others enjoy nutting out tricky problems. Researchers have long considered whether children are born with these traits or acquire them later in life. And their findings are astonishing
AUTHOR: NICOLA SCHMIDT | ILLUSTRATION: STAR WORBS | 2016/2

A primary school student sits in the laboratory of motivation researcher Carol Dweck at Stanford University and is asked to solve puzzles. For over 15 years Dweck has researched the differences between strong and weak learners in order to find out what motivates children to persevere, even when faced with difficult tasks.

The girl in the lab easily completes the first tasks and the research assistant praises her: ‘You did that really well, you must be very clever!’ Now the girl is given a significantly harder puzzle and this time she has a great deal of difficulty. In the third step of the test, the assistant gives her a choice: ‘Would you like to do another difficult puzzle or an easy puzzle?’ The girl chooses the puzzle that is significantly easier.

The researchers are mystified. They expected that after a series of successful experiences, the child would enjoy taking on new challenges and freely choose a more difficult puzzle. But the opposite is true – 90% of the children whose abilities were praised subsequently chose an easier task, so that they wouldn’t fail.

No matter how often a child experiences success or receives good grades, many of them shy away from more demanding tasks after just one failure. It isn’t success that makes children capable of dealing with difficulties, but rather the so-called ‘working model’ in their heads. Do the children believe they can grow with new challenges, or do they see failure as proof that they ‘simply have no talent’?

Children react to very subtle nuances in the language adults use.

When Carol Dweck used different phrasing to praise a second group of children, the results were completely different. This time the assistant said: ‘You did a really good job, you must have tried very hard.’ This approach praised the children’s effort rather than their talent and as a result, the children were much more likely to choose the more difficult puzzle. Dweck calls these different working models the fixed mindset and the growth mindset.

People with a fixed mindset believe that only people with a particular talent can do well in maths or English. In their view, a person’s skills are determined at birth and do not change. You’re either good at maths – or you’re not. People with this fixed mindset measure their self-worth according to how many talents they have and the things they can do easily. Dweck summarises this tendency: ‘These people think things like, “I better not make any mistakes, I better make a good impression, what do other people think of me?”’ They find failures deeply upsetting, as failures call into question their perceived sense of self: ‘Am I good at this or not?’ They don’t have strategies for growing to meet new challenges, so they try and avoid them altogether.

On the other hand, people with a growth mindset assume that they can always continue to develop and learn anything as long as they put in enough work. They tend to think, ‘Hey, this is a great opportunity, I can learn from this mistake. I feel smart when I attempt something difficult.’ When things go wrong, they ask themselves what they could do better next time. People with this kind of inner belief love challenges and see failures as steps on the road to success.

Edison and the Wright brothers: famous examples of the growth mindset

History appears to prove Dweck right – if you look closely, you’ll find that many great inventors, thinkers and scientists excelled as a result of their exceptional perseverance rather than their superior intelligence.

The inventor of the light bulb, Thomas Alva Edison, apparently built 1,000 models before he finally worked out how to make a functioning light bulb. According to legend, he summarised his long series of experiments thus: ‘I didn’t fail 1,000 times while trying to invent the light bulb. The light bulb was an invention with 1,000 steps.’

And today every time we fly we are indebted to two people who were prepared to learn from all their failed attempts. Brothers Orville and Wilbur Wright repeatedly crashed their home-made flying machines, for years. It wasn’t until 1902 that they built a glider that could carry a person and could be steered – and flew straight into history books.

Maths – a question of talent or practice?

In schools, one option is to carry out planned growth mindset interventions. As part of a study, Carol Dweck and Lisa Blackwell randomly divided middle school children classed as particularly slow learners into two groups. One group learned specifically about how the brain works like a muscle. The other group only received general learning strategies. After the intervention, teachers reported that 23% of the children in the experimental group tried harder, compared to 7% of children in the control group.

Over the last two years, Head of Primary school Colin Mortensen and his teaching staff at the Phorms school in Frankfurt have been familiarising children with the growth mindset concept from year 1 onwards. Mortensen says the idea was originally just a ‘fun project’. Since then every classroom features posters with child-appropriate slogans about the growth mindset.

At this morning’s Monday meeting, Robert MacLeod, head of year 4 and curriculum coordinator of the Phorms primary school in Frankfurt Taunus tells the children about how he learnt to play guitar. He shows them how difficult it was at first, tells them about all the things he had to learn and how long he had to persevere until he could play guitar. It’s followed by a lesson about the growth mindset. The children are encouraged to share their ideas with one another: ‘What would someone with a growth mindset say to themselves if they wanted to learn the guitar? What would someone with a fixed mindset say?’ The children’s responses are very similar to what Carol Dweck calls ‘I can do it, I just have to practice’, as opposed to ‘I will never learn how to play this song like a proper guitarist’.

Mortensen says the results of these ongoing interventions are ‘astonishing’. The children’s reading, writing and maths skills have demonstrably improved, but Mortensen considers it even more significant that disruptive behaviour has also decreased. In addition to the growth mindset, the students at this Phorms school learn a holistic approach to learning. They are encouraged to develop an understanding of how they are doing, find out which personality traits help them to succeed and which areas they still need to work on. ‘Schools often don’t teach kids how to grow with each challenge,’ laments Mortensen. And this causes many students to fail – even those who are very talented.

These skills are particularly important for the transition between primary and secondary school. Even children who sail through primary school often falter when they reach secondary school. And sometimes this trend continues. ‘If you take a look around universities, you often see students failing for the first time,’ says Jürg Frick, professor and expert in resilience and the psychology of encouragement at the University of Zurich. He warns that such students can end up suffering from depression.

Schools must teach the right attitude

In 2003, researchers commissioned by the OECD tried to find out what differentiates children who are weak learners from children who are strong learners. They surveyed 15-year-old students in 26 OECD countries. The conclusion? ‘Almost one fifth of all differences in the students’ reading ability can be traced back to the effectiveness of the learning environment, in terms of learning strategies, motivation and performance-related self-confidence.’ And children first learn this kind of self-confidence from their parents.

Praise your children – the right way

In a survey, 80% of parents claimed that they had to praise their children’s abilities to keep them motivated. ‘Well done’ or ‘you little maths whiz!’ were some of the common expressions of approval used. However, the study showed that praise alone is not enough to motivate children. In fact, the wrong kind of praise can even decrease a child’s motivation and convey the wrong mindset.

The most important basic rule? Make sure your praise is always sincere. Anything that is too general, exaggerated or obviously manipulative is not only useless for motivating children – it’s actually harmful. These were the findings of psychologists Jennifer Henderlong and Mark Lepper from Reed College in Oregon, after they evaluated over 100 studies on this topic. If children receive too much praise for achieving a simple task, they feel as if people think they are stupid and in need of special encouragement.

But it’s even more complex than that; girls are particularly prone to receiving the wrong kind of praise. In the studies, phrases like ‘Wow, you’re really good at puzzles!’ make them feel so pressured that they develop a fear of failure. Boys, on the other hand, didn’t show any signs of decreased motivation after being praised for their skills. The OECD study of 15-year-olds came to a similar conclusion: girls are often better at learning, but boys are nevertheless more confident about being able to complete even difficult tasks.

Even small children take on their parents’ mindset

The type of working model children develop is often determined at a very young age. A study by Elizabeth Gunderson and her colleagues at the universities of Chicago and Stanford came to the conclusion that the kind of praise children received in the first three years of their lives was still influencing their working models five years later. But to stay cool when dealing with failure, children also need their families to demonstrate what scientists call ‘fault tolerance’. Anne Frey conducts research into topics such as social learning in the faculty for primary school pedagogy and didactics at Ludwig Maximilian University in Munich. She says ‘it is important to set an example of how to deal with mistakes.’ Parents should not make a big deal about failures, but rather talk to their child how things could be done differently next time.

Evaluate the behaviour, not the person

Professionals who coach children and youth are not entirely uncritical about the idea of the growth mindset. Like Phorms Head of Primary school Colin Mortensen, they recommend looking at the bigger picture. ‘First of all, you have to look at how the child is doing,’ says Ludger Brenner from IPE Child and Youth Coaching. ‘Because no one struggling with anger and frustration can learn.’ To start with, it’s necessary to establish whether there is a problem with the teacher of that subject, whether the child is being structurally overwhelmed or insufficiently challenged. Or maybe the child is grappling with problems in their family or circle of friends?

Brenner suggests that ‘it’s important to look at all aspects of the child’s situation.’ Hence parents should always evaluate their children’s behaviour rather than their personalities. That means saying things like, ‘That maths test was pretty tricky, wasn’t it? Let’s see what we can do, so that you’ll find it a bit easier next time,’ instead of ‘you’re just too lazy’. That way the child knows what he or she can change, but retains a sense of self-worth. 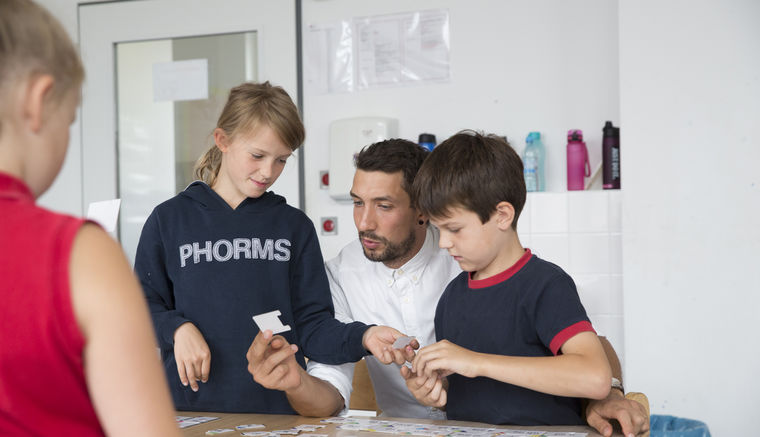 An interview with Carol Dweck: How teachers can encourage their students to become more motivated and successful

How can teachers help students to embrace challenges instead of feeling overwhelmed by them? Carol Dweck is well known for her pioneering research in the field of motivation, personality and developmental psychology. In this interview, she summarises some of her ideas about the significance of motivation when it comes to learning
PHOTO: SILKE WEINSHEIMER | 2016/2
BY GARY HOPKINS, PRODUCED BY EDUCATION WORLD
Tweet
E-Mail
Drucken