Working as a volunteer in Cambodia

“Scorpions under the pillow”: Fiona Beckmann is 16 years old and a member of year 10 at Phorms Campus Munich. She spent the summer holidays in a small Cambodian village where she volunteered at the local school
PHOTO: PRIVATE | 2014 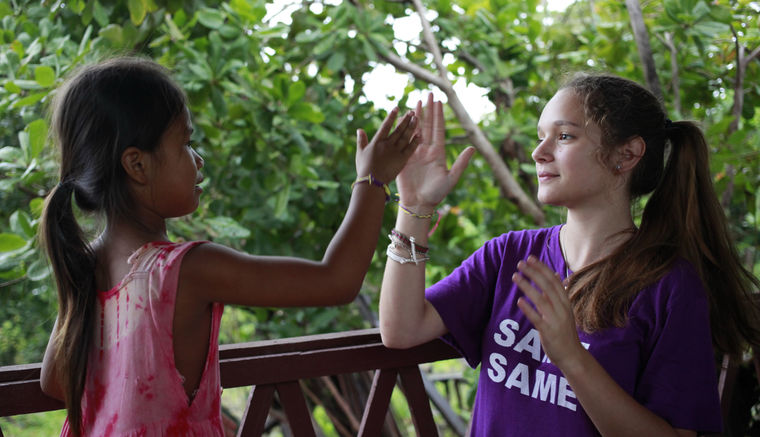 When and where exactly were you in Cambodia?

In the summer holidays of 2013, I spent a total of three weeks teaching at two schools in the north-east of Cambodia – I was working as a volunteer there. But then I was also in the capital, Phnom Penh, and Siam Reap, which is close to the famous temple city of Angkor Wat.

How did you come up with the idea to volunteer in Cambodia?

I really wanted to spend time working on a social project. Because one of my mother’s friends had helped to organise this project, it was a very good fit. I took part with a good friend of mine.

How was your stay organised?

We were in Cambodia with an association called ConCultures, and they managed the volunteer project. The goal of the organisation is to support educational initiatives in poorer regions. I travelled to Cambodia with four other young people and the woman who arranged the trip, and then I taught at two schools in cooperation with the organisation United World Schools (UWS).

What kind of support did you give to the local people?

Well, we taught the children there and did a range of other tasks. First and foremost, though, we provided great support to children learning English. Before we went to Cambodia, we collected donations and all of us were pleasantly surprised to see how much encouragement our project had received. In total, we were given six laptops and 3,500 euros, and we gave all of this to UWS.

What were your duties?

We helped out at the village school, which was built by UWS. We supported the teachers, helping them to look after the children, especially when it came to speaking English. We also played a lot with the kids, and at both schools we each taught a subject. Together with another volunteer, I gave lessons in art and sport. Working as a pair, we had to think about what we wanted to do with the children and prepare the classes. There were four different age groups at each school, ranging from the youngest – who could only just sit upright – to teenagers our age. That was a real challenge.

How were you able to communicate?

That was definitely a challenge, because none of the children spoke English very well. We learned a few words of Khmer, but after a few days we were getting along with everyone so well without having to talk a lot. For me, it was the greatest thing to realise that I could get along with everyone really well even without saying many words.

How did you live out there?

We slept in hammocks put up in the class­rooms, which was very strange but also funny. And it made good sense, too, because that way you are protected from scorpions and snakes when you sleep. At night we were usually soaking wet because it rained a lot and the classrooms were half open. We washed in the river every day. It was a genuinely exciting experience.

We taught the children from 7.30 to 11 a.m., then it was time for a lunch break – not least because it was too hot and humid to do anything. Then the children came back and we played together for a while before rehearsing a play in Khmer and in English.

Do you feel different about daily life in Germany after this experience?

Of course it’s nice to sleep in your own bed again. It’s also great not having to look under the duvet and pillow to make sure that no scorpions have made themselves at home in my bed. But you get used to these things quickly.

Not really. I missed my family, of course, but everything was all right. Actually I had no time to be homesick because there were plans for the whole day from the moment I got up to the moment I went to bed.

Was there anything else that you missed apart from your family?

I missed what you might call ‘proper food’, because we only ever ate rice for breakfast, lunch and dinner. Rice three times a day with sauce is very boring and sometimes I really fancied a salad or a pizza.

Thinking about the country and the people, what are the biggest differences to Germany? And is there anything you miss here, maybe?

Faith is very present in Cambodia, especially with all the temples everywhere. That took some getting used to, but I think that’s one reason why the people there have such strong bonds to each other. In Germany it is quite different, because so many different religions are present and religion is not as important for us. But Cambodia is not as developed, and I think that’s why faith is particularly important for the people there.

What tips would you offer people who are thinking about volunteering?

Everyone should do something they find interesting. If you don’t like working with people, then I recommend something to do with animals and vice versa. You should find a project and a country that interests you personally.