At Phorms Campus Berlin Mitte, a summit meeting is taking place for the international community. The working title is “Feed the People”. Among the representatives from 42 countries are undercover al-Qaeda agents, Julian Assange and the Pope
AUTHOR: MARIE SCHÜTZ | PHOTO: ANDREA USISON | 2014/1 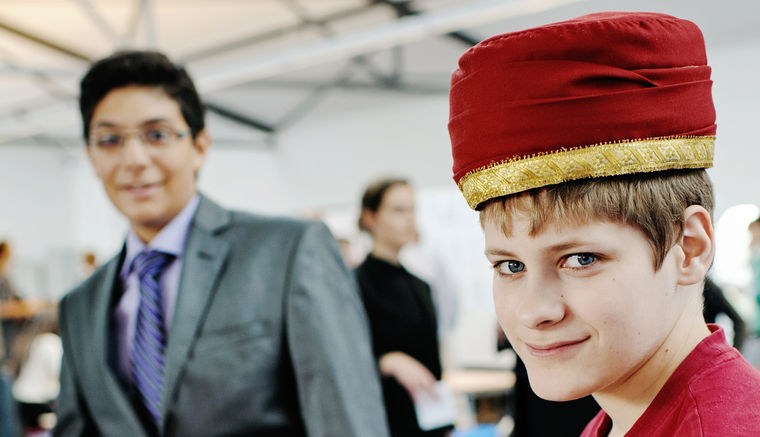 The summit meeting was convened by Christopher Slattery. Aid organisations such as the Red Cross have sent representatives to Berlin, as have international organisations including the IMF, OPEC and Interpol. News agency Reuters is following the gathering in the media.

Slattery is a secondary school teacher at Phorms Campus Berlin Mitte. In total, 120 students, three alumni and 20 teachers are taking part – because a simulation is in progress. With respect to the food shortage that exists in some parts of the world, the aim of today’s conference is to negotiate the problem, if not to overcome it, using the tools of international diplomacy. The fact that this calls for cooperation and agreements in very different areas is something the students learn very quickly.

To begin proceedings, Christopher Slattery welcomes the participants and explains the exact timing as well as some important rules. The students are sitting behind a large semicircle of tables, ranked according to the importance of their state just like at a meeting of the UN General Assembly. Many students are dressed in striking costumes that correspond to local traditions, sporting chadors, bamboo hats or Basque-style berets. The Pope is all in white, of course. In line with the actual economic situation, each country possesses oil and raw materials, for example, or requires aid to produce food. Each state must do business with its goods on the global market and demonstrate as much power as possible. But at this point the reality of the situation strikes: what can be done if a state does not have sufficient capacity to process its raw materials? What if a country has no machines or valuable resources? What are the consequences and advantages for a country if it supports economically weak states? And just where is Julian Assange? The simulation teaches students about highly complex economic and political relationships.

Prior to the day, they have prepared well for the event in lessons. They have studied current issues of tension and the developments surrounding Edward Snowden as well as protracted problem areas such as the Middle East conflict and the US trade embargo against Cuba.

When the simulation begins, students are busy moving between tables, discussing and negotiating, taking into account past and present disagreements and pausing for a moment at the lectern when new announcements are made. Trade embargoes, draft contracts and national treaties – the students keep track of everything. They all have different problems to cope with. Ronja Brömme from year 10 at Phorms Campus Berlin Süd says, “Ethiopia has no money, no water and no food. That’s a challenge.” Leander Krawinkel from year 9 at Berlin Mitte is taking on the role of Pope for the day. He is doing all he can to make sure the Catholic Church supports economically weak countries. “The dominion of the Church must expand, otherwise some countries may become Muslim,” he says, explaining his strategy.

The students are extremely convincing in their roles. The Phorms students take a pragmatic and objective view of political controversies. “Why exactly do we have a trade embargo against Cuba?” asks one student representing the United States. There are no logical arguments for this, so the embargo is lifted. The representative of Cuba, Kai Alexander Knecht from year 12 at Berlin Mitte, reacts casually to the news. He embodies the laid-back Cuban lifestyle, sitting at the table with an army cap like Fidel Castro and watching how events proceed. There is a short discussion about gay marriage and most countries then allow it without any compromises. The Security Council approves the reunification of Israel and the Palestinian territories. Three students dressed in chadors are delighted by the news –representatives of the Palestinian National Authority. This is an area where the simulation is more optimistic than reality.

Events are observed by employees of Interpol, the International Monetary Fund and the Red Cross – roles that are filled by secondary school teachers. They also try to control and influence things so that everyone follows the rules. Christopher Slattery, the man responsible for the overall event, is kept busy with the role of chairman. Standing at the lectern, he announces all new contracts and agreements. In the weeks running up to the meeting, Slattery spent between 30 and 50 hours a week preparing the simulation. But to what end? Wouldn’t it be enough to have simple lessons that cover current events and test the students’ knowledge? “My goal is to inspire the students for the world they live in and to spark an interest in current events,” explains Slattery. The simulation makes global politics more tangible for the students; they can get a sense of what it feels like to be able to make a difference. The main priority is not that students understand all the various relationships, but this project makes them deal intensively with issues that they would otherwise only know about from the news.

The uncomplicated negotiations of students take place in an optimistic atmosphere. The participants seem to find it easier than intended to clear up issues of major political conflict and to get along in harmony. At the end of the simulation there is a positive mood. Important conflicts that dominate the world today have apparently been resolved.

In order to see how global events would develop with these positive changes, a second round of the simulation “Feed the People” is planned directly after the first simulation. This time, however, the conditions are completely different. The simulation takes place in 2050, which means that the political balance of power has shifted considerably due to the consumption of natural resources, famine and demographic change.

The overtones of optimism that spread out during the first simulation now appear to have vanished. Although there are still some positive developments – a cure for HIV has been devel­oped, for instance – students adopt an icier tone. Cooperative agreements are brought to an end, suicide bombers are active in parts of the world that had previously been spared, the countries on the Arabian peninsula have exhausted their oil reserves and are losing their influence, Russia is poised to build a city on the moon and a nuclear bomb has been detonated over New York.

The situation is growing worse. The People’s Republic of China insists that the United States pay back their debts in the foreseeable future, which prompts the United States to declare war on China. All of the students then have to take a position, siding with one of the two nations as a representative of their own country. This causes today’s two main world powers, the United States and China, to lose a great deal of influence, and Russia rises to become the most powerful superstate. The students notice how quickly the political mood can change. And before the world sinks into absolute chaos, the simulation is brought to an official end.

Even if the simulation has not brought about world peace, Slattery is certain that the event has borne some fruit. “If you represent a country that is poor in resources and that perhaps has no attractive trade goods or that is threatened with famine, then it can be difficult to get through the situation without the aid of others. This requires the students to be creative: they have to exchange information and create networks with each other,” explains Slattery. In 2050, perhaps the students will look back and see that some of the points they negotiated in the simulation have actually occurred. He hopes that they recognise the fact that the future lies in their hands. For this reason, it is important that students confront reality, even if things do not always look rosy. They learn to deal with a complex issue on a daily basis, getting a feel for how big the world is and taking part in global events from the school hall. Slattery says that students are now much more interested in the world – something that is clear from the fact that many more now follow the news. “During the simulation, they make decisions that they feel are the best for their country, whether they concern investing in fresh water, joining NATO or placing and lifting embargoes against certain countries.”

To continue inspiring his students for international politics, Slattery is planning another simulation. “Our goal is to make next year’s simulation a two-day event involving high school students from all the Phorms Schools.” This would strengthen the global character and sense of community between the schools. 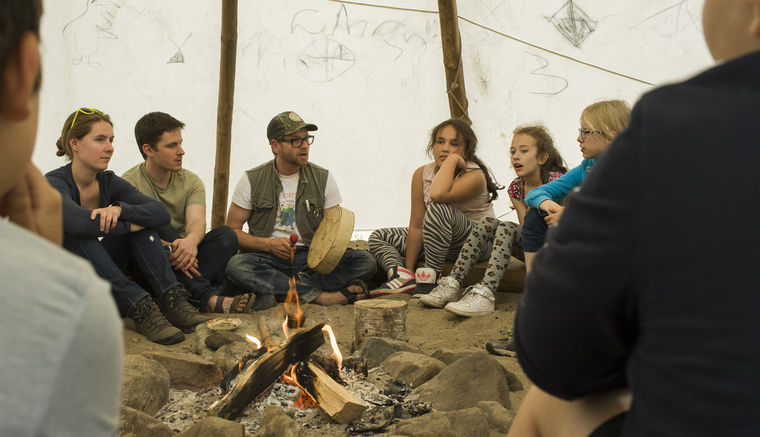