Get out into the wild!

Andreas Weber, an expert in the field, talks about why our children should get some forest air now and then
Photos: Stefan Wieland | Author: Andreas Weber | 2018/1 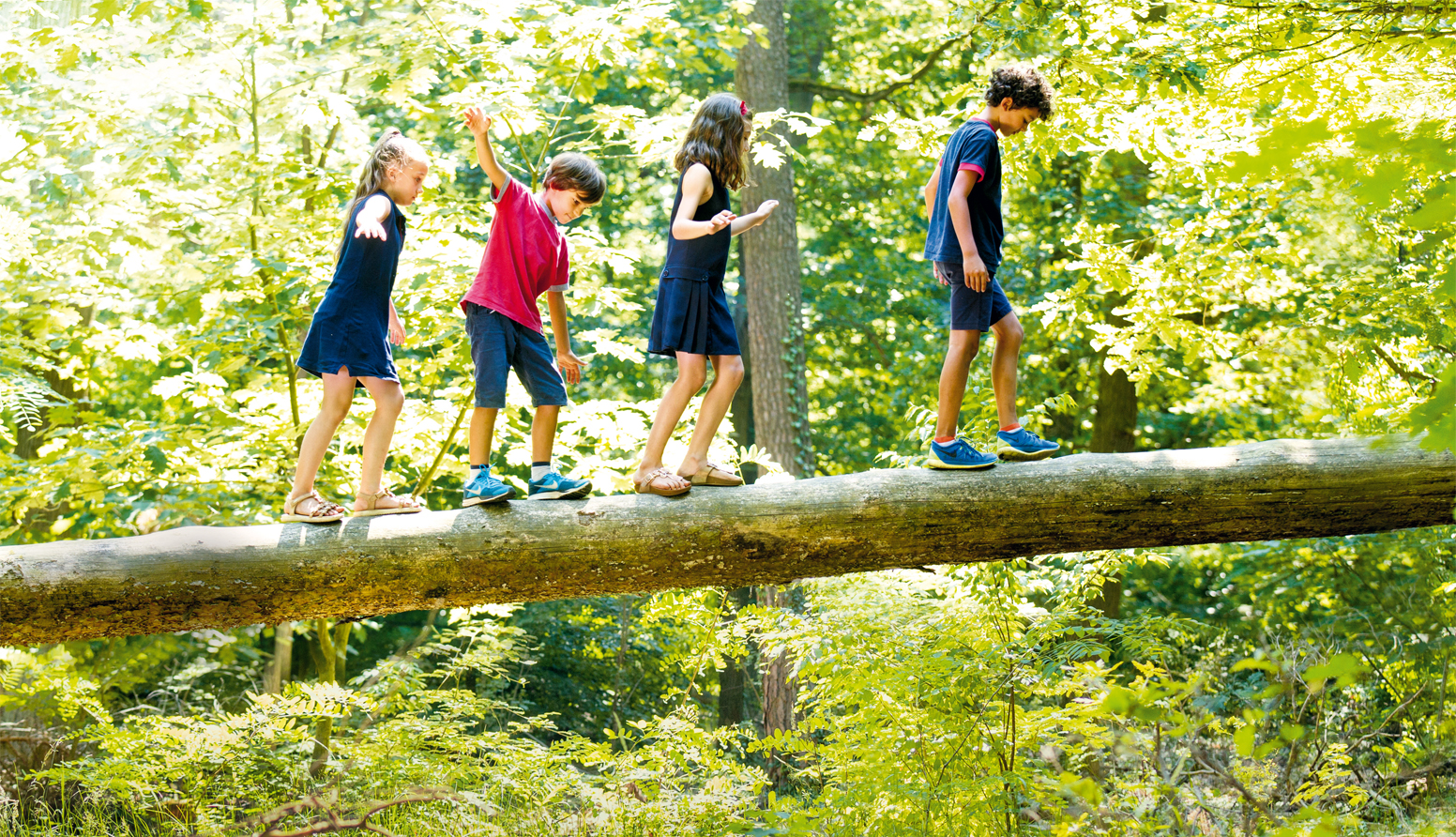 Maria Tasker is heading for the long break today in a buoyant, almost glowing mood. The lesson in the copse near the school has made the biology teacher happy. While countless colleagues sit in staff rooms up and down the country during the short rest period, attempting to recover from exhaustion after the first school lessons of the day, Maria Tasker has brought in energy from being outside in nature.

It’s the same energy that also filled her students with life during the last lesson: ‘The children were totally overwhelmed,’ says the 55-year-old Brit. For two days, the children in years 5 and 6 have been searching in the leaves for invertebrates, beetles, snails, spiders and woodlice. ‘And today, the creatures just exploded out of the leaves!’ says Maria. Outside during the practical biology lesson, on the dry straw among the vernal goings-on in the copse, the children have learned something not just about life but for life.

The morning stroll in nature wasn’t a class outing but a component of Maria Tasker’s ordinary, everyday teaching methods. She moves her biology lesson at the Phorms school in Neckarsulm, Baden-Württemberg, outside as often as possible. ‘Bio-logy’ is the science of living things – and the first place to look for them isn’t in books, but there where they breathe and grow. The Josef-Schwarz-Schule in Neckarsulm is lucky to have a natural area right next door, which Maria can use as an extended classroom.

‘It makes the children happy,’ she says. Like many Phorms teachers, she didn’t embark on a teaching career straight out of school but, instead, first worked in the field that she now teaches. A biology graduate, she used to work in the development department of an international food company, but she has always been attracted to teaching. Because she’d also done teacher training during her studies, she found the switch easy.

And she’s now in a position to pass on to others what gave her the most pleasure in her youth: ‘My teaching is about remembering the source of my own interest,’ she says. ‘I have lots of memories about how it feels to be outside, which shaped me.’ For many people who became natural scientists and conservationists, childhood experiences in nature were key to their decision to study life sciences. It’s this passion and spark that Maria wants to pass on to the young generation: ‘As a teacher, you can’t succeed in passing on really deep knowledge, beyond pure learning by rote, if you don’t allow students to really feel reality.’

Maria Tasker is a pioneer in her school. Outside learning is not a compulsory part of the timetable. Experiencing nature as a school subject isn’t standard in the Phorms school either, although the educational institution is considerably more open than the average state school to innovative pedagogic concepts and is something of a pioneer in intercultural education. There is a hint here of the old pedagogical ideal of education for the self and life.

With her teaching, Maria Tasker is also helping to counteract a trend that is currently shaking our society to the core: nature is playing an ever-diminishing role in children’s lives as a space for experiences. A trend that has crept up on us in the last 20 years, it has meanwhile led to today’s childhood being a mostly indoors existence. With kids fed facts at school, trained to be high-performance athletes in recreational sport and lulled by the availability of always-on screens, spending time in a halfway natural environment is dying out.

Increasing numbers of children – globally now more than half – are growing up in urban environments. Technology and traffic are such a dominant part of their everyday lives that many have stopped going out by themselves, let alone wandering around in a wild environment. More than half of Germany’s city kids play almost exclusively behind closed doors – at home or in the nursery.

Children have stopped going out, even to unspoilt places that would be accessible, and very few country kids roam around their environment. Instead of creating fantasy worlds outdoors, they submerge themselves in the artificial scenarios of electronic media. In Germany, children between the ages of three and 13 spend almost one and a half hours a day staring at the TV and almost as long at the computer screen – that’s not including the touch screen on their smartphones. In the US, electronic media wipes six and a half hours off the day. When environmental journalist Richard Louv asked a nine-year-old where he spent his free time, the answer was: ‘I like to play indoors better, because that’s where all the electrical outlets are’.

In a German study as recent as 1990, almost three-quarters of the six- to 13-year-olds questioned said they played outside every day. By 2003, this figure was already less than half and now, another generation of children later, it’s even lower. Children have become as rare as butterflies in nature and have virtually no desire to go outside. A recent study of six- to 13-year-olds showed that between 2004 and 2014, their interest in nature fell by 20 percentage points.

Herbert Renz-Polster, a paediatrician and educator, found that ‘the space in which children are allowed to play and discover on their own decreased to a ninth between 1970 and 1990’. Citing the KiGGS study on child and youth health in Germany, he says that ‘only 45 % of six- to 10-year-olds ever go outside on a daily basis’. In a 2016 survey, no more than 12 % of young people were able to name three edible fruits that grow on the edge of woods.

It would appear that living experiences are being eradicated from our culture on a grand scale and with a totally uncertain outcome. Of course, a single school like Phorms, and the occasional teacher, cannot offset this trend, but it can tap a resource that’s as necessary as drinking water. Because humans are still a living part of an ecosystem that provides them with food and oxygen for breathing.

This knowledge underpins all science because it is the basis for life. People with only a theoretical knowledge of life are not living by a long stretch – and don’t necessarily have an interest in increasing the vitality of the biosphere. In fact, too much abstract information about ecology and environmental destruction can switch children totally off the issue.

But it’s quite different if we’re forming our own experiences in a world that puts on a delicate, light-green display in spring, offers opportunities for hiding and climbing, and with every stem tells a story we can build on with our own imagination. These experiences, provided by non-human beings, strengthen our own vitality – which includes actively advocating on behalf of the world’s beauty, an experience that strengthens and refreshes – and it results in learning that is much more efficient than cramming abstract facts.

‘There’s a time between the age of five and 12,’ says the US writer and Pulitzer Prize winner Wallace Stegner, ‘when a fleeting impression can be imprinted for life. If a child is exposed during this sensitive phase to a particular environment, it will keep it in its heart to the end of its days.’

And the beauty of life outside is always a voice: wind whistling, grasses rustling, buds crackling as they open, birds calling at dawn and in the golden hour just before sunset, when everything gathers for the night. Cristina Follmer works with this voice of life in her lessons. She has recently moved her music lessons at the Phorms Taunus Campus outside – and luckily, like her colleague in Neckarsulm, has a piece of semi-wilderness within walking distance.

‘The wood gives us natural music. Children need that,’ says the teacher, who, like Maria Tasker, didn’t follow a straight career path to her job. The daughter of German parents, earlier in her life she led the ‘Coralito’, a small choir at Teatro Colón in Buenos Aires, Argentina. But even there, Cristina Follmer endeavoured to sing outside as often as possible. ‘There’s always an echo inside,’ she says, ‘but not in the woods.’ It’s all voice there – not the echo of an often loveless building created by human hand. The voice of the wind and the voice of children. Follmer gets her protégés – she teaches years 1 to 4 – to collect natural instruments from the wood and make music with them: sticks for claves, stones for cymbals and xylophones, rustling leaves. Overhead, birds sing their songs. ‘I see time and again that the children need this. None of them ever refuse to be taught outside,’ says Cristina. 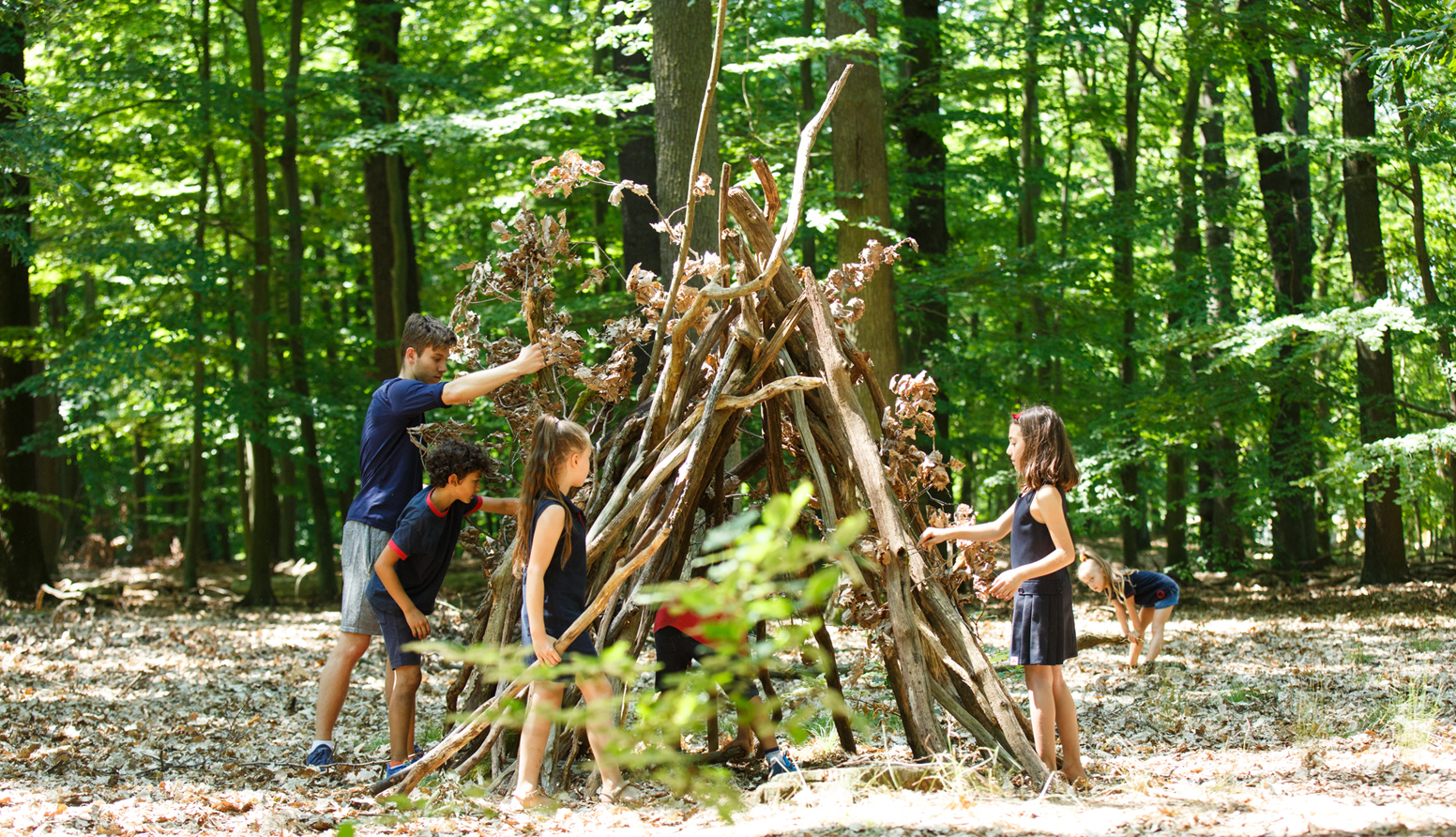 A team of environmental educators recently confirmed that a natural environment stimulates children’s cognitive abilities. They studied young people in ‘areas for experiencing nature’ – areas reserved for children but which, unlike playgrounds, are left to develop naturally rather than be equipped with machines. They found that children play significantly more complex games in nature than in controlled rooms. They can concentrate much better, and they are more alert and interested in what’s going on around them.

In a glade with a large tree stump, Cristina Follmer has built a temporary auditorium. ‘A green classroom would be nicest,’ says the music teacher, with a few pieces of wooden furniture on the ground and a roof of leaves overhead. Cristina Follmer feels she is in good hands at Phorms with her way of teaching: ‘The school understands what the children need, and that always teaching in a classroom isn’t the right way.’ She also takes the local choir into the woods as often as possible.

Only a decade ago, teachers like her would have been mocked as eco warriors or esoterics. These days, there is a stack of hard facts proving how beneficial woodland air is: almost all physiological parameters relevant to health are at a healthy level. Stress hormones sink, antibodies multiply, blood pressure sinks, and the brain is rested and running in peak condition.

‘Woodland bathing’, a form of therapy that is becoming more and more popular, exploits this beneficial impact of nature on the brain and body. Phorms teachers Maria Tasker and Cristina Follmer intuitively act just the same: school lessons are a healing tool, not stressful. Instead of having facts drummed in, children are treated with vitality. If that doesn’t count as learning for life, then what does? 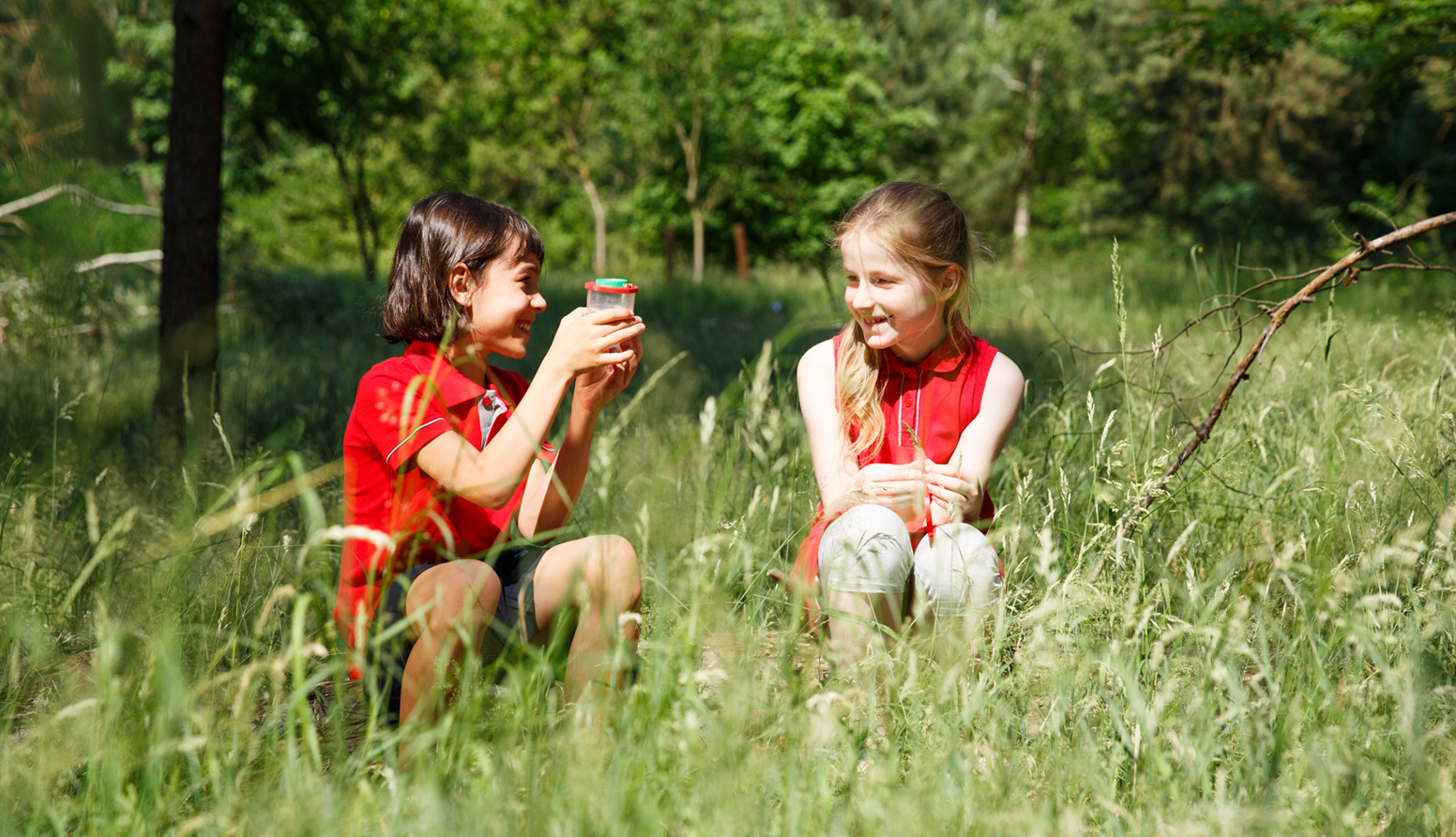 ‘Nature teaches each of us what we need’