A highlight of the calendar at Phorms Campus Berlin Mitte is the fashion show produced by students on the advanced art course. There were more fascinating creations this school year
PHOTO: ANDREA USISON | 2015/1 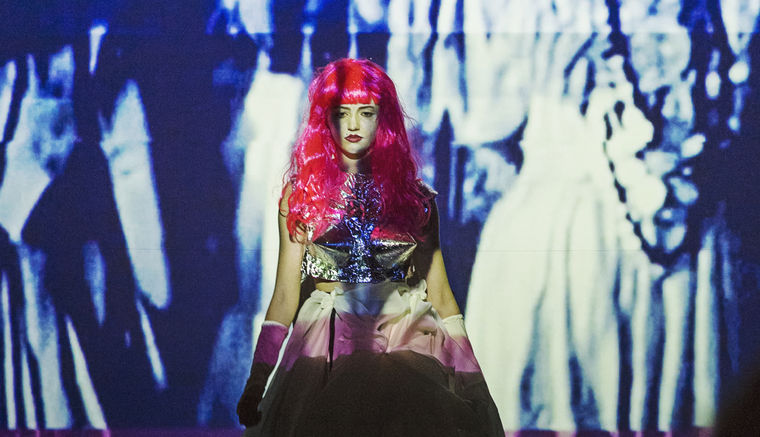 Artificial fog spreads across the stage, psychedelic music comes from the speakers, a shocking pink neon light flashes through the air and the curtain opens. A model wearing a skirt made from veil material and metal bars walks towards the public in time with the beat. She stops, puts her hands on her hips and looks into the distance. Then she turns and skilfully steps back behind the curtain in her high heels. The next model is wearing a skirt made of wood, and angel wings adorn her back. The fabric wings flutter with each step in sync with the bass until the model disappears again behind the curtain. In the brick building of Phorms Campus Berlin Mitte, lessons are on hold for an hour to make way for fashion and art.

Emely is gracefully walking around to the rhythm of the music to present the clothes, but she also created the first three outfits herself. Her collection is inspired by Sinti and Roma culture, and it is called Daily Obstacles. “The collection is intended to reflect the barriers faced by this culture,” she says. As part of the advanced art course, she and seven other year twelve students at the Phorms secondary school in Berlin Mitte organised their own fashion show on 16 September in the school theatre in line with the motto “From the Past to the Future”. In cooperation with Berlin-based designer Ruth Janessa Funk, each student developed a personal fashion collection dealing with the history of different cultures. Their designs were inspired by elements of traditional African, Indian and Arab dress, among other things.

Emely’s last creation is worn by Elizabeth from year ten. A pleated skirt made from newspapers bounces around her hips. It took a long time to put this skirt together, explains Emely. “I even sat with my grandmother folding newspapers. And when friends came to visit, they had to get folding as well,” she laughs. The young designer says that the pleated skirt might be understood as a metaphor for the power of the media.

The overall concept of the show was developed by artist and teacher Dr Nina Schönefeld together with the students. “Students also had to come up with the overall concept, not only their individual creations,” she explains. From the music to the photos and videos, everything was organised around the main topic. Designer Ruth Janessa Funk offered personal assistance when it came to sewing, as some students were operating a sewing machine for the first time – like 17-year-old Luc. “Sewing was pure torture, but the designer made it a lot of fun,” he says.

The students’ creations are extremely varied. On the whole, Luc’s collection presents brighter colours and a natural green. Lara, on the other hand, brings striking use of colour into play. Her first model steps onto the catwalk in a pink wig wearing an outfit that would even impress a superstar like Madonna: an aluminium top with breast cones together with loud, colourful hair and a hoop skirt covered with white material. With a striking painted-on mole, a face powdered white and bloodred lips, the face of the young model’s face is a little reminiscent of Queen Marie Antoinette.

While most creations may not be suitable for everyday use, they are surprising and beautiful to look at. The project was managed just like a professional fashion show. Students from all year groups were involved in the event. For instance, students in the lower school acted as models, while the year eleven advanced art class was responsible for marketing and others helped on the technical side. “It’s great fun,” says Zazie. She has been presenting Emely’s creations and is also taking advanced art classes. Zazie is already looking forward to putting together her own collection next year.